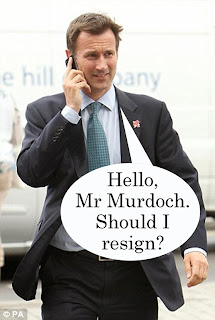 No, I Really Was Laughing Out Loud, Replies Cameron

Countering former Murdoch right-hand tentacle Rebekah Brooks’ testimony at the Leveson Inquiry, in which the flame-haired fixer suggested that David Cameron thought LOL meant ‘lots of love’ when he texted his commiserations on her resignation, the prime minister said that he distinctly recalled laughing audibly at the news of her tragic misfortune - adding that his bladder spontaneously malfunctioned, leaving him rolling helplessly on the floor for several minutes with his fucking arse hanging off.

“I think this proves that, far from being hopelessly out of touch with the people of Britain, I am truly down with the youths,” beamed Mr Cameron, adding: “Is it not?”

The crashed Curtiss P-40 discovered in the Egyptian desert after 70 years is to be purchased for the nation, restored to flying condition and assigned to the Royal Navy’s carrier fleet, little Richard Hammond told the House of Commons today.

“This historic pile of scrap is not just a tribute to a generation of heroes who willingly gave their lives in the nation’s hour of greatest need,” explained the diminutive defence secretary. “Bolt a hook on the back and hey presto, it perfectly matches for our fleet requirements for a strike fighter. Pity it wasn’t a Firefly, though. They came with a dinghy thrown in free.”

Mr Hammond also expressed the hope that diligent searchers would eventually discover what happened to missing pilot Dennis Copping, who apparently walked away from the crash site.

“As I see it, Flight Sergeant Copping deliberately went AWOL,” he announced, “When he turns up, I reckon the least he can do to make amends is to train a new generation of naval pilots in P-40 operations.”
at 19:42 No comments:

Ferrari Painter Hired By Government To Create Illusion Of Prosperity

Chris Smart - the doomed call-centre drone who painted the dream car that a lifetime of drudgery will never afford onto his garage door - was today offered a job by chancellor George Osborne, who hopes to use Mr Smart’s deceptively realistic trompe l‘oeil artistry to persuade Britain that the recession is just a dim memory and it is experiencing an unprecedented economic boom which will go on forever, or at least until the paint flakes off.

Mr Smart has already been put to work in Merton’s dilapidated High Street, where a row of boarded-up shops has been transformed into an earthly paradise by the illusion of a bustling wine bar, a Bentley showroom and an exclusive City restaurant.

“Business is booming again, at least for me,” enthused the former art student, as he searched Google for more inspiring images of vanished prosperity. “When I’ve finished with Britain’s shopping centres, the Ministry of Defence has already asked me to paint over the cracks in our naval strategy. That’ll keep me going for a good few years.”
at 20:00 No comments:

The head of schools inspectorate Ofsted has scoffed at teachers’ claims that their jobs are stressful - reminding them that his granddad spent four years down a hole in France with the Imperial German Army lobbing 50,000 shells a day at him, yet woke up screaming just once a week for the rest of his life.

“Our brave lads in Afghanistan can tell these whining civilian blackboard-wallahs a thing or two about stress, dammit,” roared General Sir Michael Wilshaw, as he infiltrated a school playground in Wolverhampton.

“Right-o, chaps, gather round and I’ll put you in the picture,” he explained crisply. “Miss Chalmers, the flat-chested head of humanities, has been sent to patrol the Low Hill estate in her Fiesta, with ‘Dorky’ Dawson the art assistant riding shotgun. They’re in your homeland, and they’ve got no bally business there. What are you chaps going to do about that, eh?”

As hordes of latchkey kids enthusiastically looted Sir Michael’s arms dump, the outspoken chief of school inspectors insisted that the impending massacre would “toughen these gutless teacher johnnies up, put some bloody backbone into them and make them jolly proud to be in the front line and serving their country, what?”
at 19:57 No comments:

After years of indecision about which version of the F-35 fighter – the one that melts a hole in the deck, or the one that will merely fall off the end of it - is worst suited to Britain’s future aircraft carrier fleet, David Cameron today shackled the nation to everlasting penury by reordering the notorious Nimrod AEW Mk3 for the Fleet Air Arm instead.

“The AEW Nimrod project was one of the most colossal wastes of time, money and effort in aviation history,” commented the Nev Filter’s resident plane-spotter, Neville Mann. “To this day, nobody knows just how much of Britain's dwindling post-war wealth was flung into a bottomless pit by successive governments as British Aerospace and Ferranti executives grinned like wanking Japs every year and promised to shoehorn a sodding great Boeing E-3 into a second-hand airliner half its size, if they could just have one more teeny-weeny blank cheque.”

While the Royal Navy has no operational requirement for a massive airborne early warning system, since the MoD ended up buying the Boeings they could have been operating for 17 years, Mr Cameron has been reassured by eager BAe chiefs that it is entirely possible to hang a missile off each wing and pretend the bulbous, sluggish white elephant represents the last word in air superiority. Other critical missions for which the lumbering money sink can be readily adapted include wallowing along at zero feet whilst redundant AEW sysops lob hand grenades through the nosewheel bay, keeping BAe executives in the luxury to which they are accustomed, and exploding in mid-air, killing everyone on board.

“Of course, there may be minor teething problems in that, with a wingspan of 115ft and tipping the scales at 85 tonnes, the Nimrod is totally incapable of operating from our carriers,” conceded Mr Cameron. “Then again, nor is the F-35. But the important thing that the taxpayer needs to keep in mind is that the Nimrod is, of course, 100% British.”

Artificial intelligence specialists pronounced themselves delighted with this morning’s State Opening of Parliament, in which the experimental text-to-speech app they installed in the Queen has proved itself fully capable of rendering even the most incomprehensible scribble into something closely resembling rational speech.

“If the software was going to trip over the test data anywhere, it was likely to be the gag about spotting terrorists by reading the entire internet in realtime,” laughed Dr Mel Strangelove, the project leader who, only last month, upgraded Queen Elizabeth II to Android Ice Cream Sandwich.

“We heard Apple were running a sweepstake on which bit would make Her Majesty stutter and crash, but we always knew she’d sail through without a glitch.” Dr Strangelove added that the Queen had now been put into standby mode and returned to the software lab, where developers hope she will soon be capable of looking at modern art and working out what it is supposed to represent.
at 21:05 No comments:

The pound in your pocket has never promised so much action-packed fun for your summer holidays, say uncharacteristically cheerful travel agents, as impoverished peasant mobs from France To Greece angrily dust off their rusty tumbrils and rebel against their hated leaders.

“As the eurozone collapses headlong into blood-red anarchy, sterling has finally found some residual value,” gushed the manager of a Thomas Cook in Ruislip. “If you can find someone to parachute you into Greece, right now you can sleep in a five-star hotel bed that’s been hauled out into the balmy streets of Athens for a makeshift barricade for as little as 50p a night. A Michelin-recommended dinner with a bottle of exquisite raki will cost as little as a pound, and then you can fill the empty bottle with petrol and hurl it at a policeman to round off the perfect romantic socialist evening.”

Meanwhile, in revolutionary France, cheap family adventure holidays guarantee fun the whole family can enjoy together, as you and your children are encouraged to hurl abuse and unfeasibly large cabbages at the evil capitalist Sarkozy and his overthrown lackeys before entering a prize draw for the rare opportunity to actually pull the string on the famous guillotine.

“And in Germany’s picturesque Schleswig-Holstein right now,” he added breathlessly, “You too can get a grandstand view with all the excitement of daredevil Angela Merkel tearing around in ever-decreasing circles. You can be there when the wheels finally fall off her reckless plans for Eurozone domination!”
at 19:43 No comments:

Newspapers will officially cease to exist in Britain from this day forward,” sobbed a guilt-ridden Richard Desmond today, after editors, proprietors and hacks united in condemning the ‘outrageous’ use of a photograph of Madeleine McCann merely to sell things to the public.

The repentant Mr Desmond - owner of the Daily Express and the Daily Star - spoke on behalf of the entire print media industry, after five shameless years of slapping a photograph of the missing child on the front page for a quick sales boost, before shaving his head and disappearing forever into a Trappist monastery.

Horrified advertisers have been quick to disassociate themselves from disgusting scum who cynically feed off individual misery. “We’re outraged,” said a spokesman for Astescburysons. “We had absolutely no inkling that the newspaper industry could have sunk so low. Don’t miss next week’s amazing 3-for-2 deals on Madeleine-flavoured crisps, by the way.”
at 19:39 No comments:

The cabinet has today declined to publish the risk register for NHS hospitals in England, modestly claiming that healthcare provision has now achieved such absolute perfection that it would be embarrassing to go into any detail.

“The information commissioner is already complaining, and I can’t blame him for asking because everyone likes to be the bearer of good news,” smiled health secretary Angela Lansbury diffidently, “But I just don’t want all our hard-working, dedicated doctors and nurses to get all big-headed, just because they’ve cured everybody of everything and abolished death from our land forever. It’s all here in this report, which I’m not going to show you.”

The remarkably self-effacing Mrs Lansbury added that he was “a firm believer in greater transparency”, which was why he was sending the report back to the printers to be republished using invisible ink.
at 19:31 No comments: