On this day, it so happened that a repentant St. Iain Pduncan Psmith did testify before unbelieving scribes that the Lord Jsasus had appeared unto him in a vision as his party was journeying on the road to local election wipeout, demanding: “Smith, Smith, why do you persecute me?” before miraculously striking him utterly kind.

And it came to pass that St. Pduncan Psmith – hitherto feared throughout the land as the scourge of the weak – did henceforth bear witness to the suffering of the poor, the halt and the lame before the Pharisees of the Treasury, sending an inspirational epistle to the Times.

Verily, however, disabled recipients of the former high priest’s ministrations – many of whom had miraculously been declared fit by his Atos Medical minions – yet harboured in their hearts lingering doubts about St. Pduncan Psmith’s phenomenal affliction of kindness; for, in their wickedness, they said unto one another: “Indeed, this is like unto some temporary sort of kindness, from which he might recover just as miraculously on May 4th.”

Swingeing defence cuts have left the UK’s armed forces without any hardware capable of running Call Of Duty: Modern Warfare 3, according to shocked NATO allies - who first noticed a shortfall in Britain’s defence capabilities when they were invited to “bring any spare cereal packets” aboard HMS Illustrious for a simulated amphibious assault during the current exercises taking place off the shores of Scotland.

“We’re used to planning operations in our destroyer’s state-of-the-art Xbox Mission Suite,” said a horrified Dutch commander afterwards, “So it came as a bit of a surprise to see a blue-painted table in the middle of the hangar deck with a pair of marines painting Cornflake boxes grey and folding them into rudimentary ships. Haven’t the Royal Navy heard of quad-core laptops?”

Admiral ‘Froggy’ Legg apologised to his NATO counterparts, explaining that Britain’s top strategists were eagerly waiting for couriers to fly out the BNIB Radeon graphics card they bought on eBay, which they hope will upgrade HMS Illustrious’ desktop PC to the minimum spec needed to run MW3.

“Meanwhile, we were hoping to have a splendid Airfix model as the centrepiece of our wargames,” he added with a sigh. “Unfortunately, however, Chief ‘Salty’ McTavish keeps getting high on the glue.”
at 16:38 No comments:

As Britain’s local authorities agreed today that they could either continue to change your granny’s pissy knickers once a week or run the facilities they were entrusted with generations ago for the public to benefit from, Plymouth City Council leader Viv Pengelly nailed a giant ‘EVERYTHING MUST GO!!!’ sign to its just-opened £46m sports complex, The Life Centre, and posted it on eBay with a starting price of just 99p.

A spokesman for the cash-strapped westcountry council – which, in recent years, has already divested itself of its buses, its airport, all hope for the future and any pretence at caring – pointed out that all local authorities were being forced to dream up new ways of meeting the staggering cost of wringing stale wee out of your nan’s bedclothes without negatively impacting on their hardworking senior officers’ modest remuneration packages.

“You could say that it was perhaps a trifle lavish of Plymouth City Council to throw money it hadn’t got at a monumental vanity project its citizens couldn’t afford,” he explained. “But you won’t say it in the local paper, because it was their damn fool suggestion in the first place.”

“And, of course, it goes without saying that you’ve long since forgotten that you all said it was a bloody brilliant idea at the time,” he added.
at 20:57 No comments: 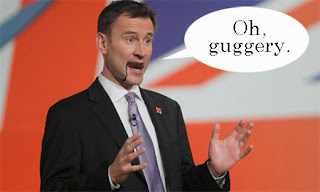 Stunned Treasury officials - who had confidently predicted that official statistics would confirm that Britain has never had it so good – were today quick to blame the Eurozone, the French presidential elections, Mitt Romney, Sudanese border incidents, Syrian ceasefire violations, the Leveson inquiry, drought, heavy rain, Russell Brand’s drug hell, the body-in-the-bag inquest and the Breivik trial in Norway for the economy’s plunge back into recession.

“The important thing to bear in mind is that the British economy has nothing whatsoever to do with either Britain or its economy,” mumbled a red-faced civil servant, “And, least of all, the chancellor of the exchequer.”

Mr Osborne was sadly unavailable for comment, he added, as he was currently undergoing emergency surgery for a slipped smirk which happened at 10.00 this morning, although he is expected to announce a 100% cut in the National Audit Office’s budget as soon as the paint dries.
at 10:15 No comments:

£16bn Cuts Nothing To Do With £10bn Loan, Says Human Candle

It is a complete coincidence that a further £16bn is to be hacked off collapsing public services just days after George Osborne flushed £10bn down the IMF’s Eurozone toilet, the chancellor’s LibDem whipping-boy today assured a sceptical nation.

“The IMF demand came completely out of the blue, so naturally there was no mention of it in my budget speech,” insisted Treasury scapegoat Danny Alexander, as smoke mysteriously began to rise from the seat of his pants. “These savings, on the other hand, were definitely in the chancellor’s speech, cross my heart - but unfortunately it seems he turned over two pages at the same time, and perhaps that could be why you might have a bit of trouble recalling any mention of them.”

To prove that Mr Osborne’s £16bn raid on the already-creaking machinery of state is not simply a hastily-implemented panic measure to cover a gaping chasm in his spending plans, a roaring Mr Alexander assured Britain that the chancellor is already trying to dream up a way to recover a surprise surplus – thought to be not unadjacent to £10bn - from the newly cost-effective machinery of state as a long-planned bonus measure to add even more flexibility to his spending plans.

“So there you are,” screamed Mr Alexander, rolling around on the floor as frantic Treasury officials sprayed his blazing underpants with foam. “Nothing to get excited about.”
at 19:03 No comments:

Furiously bubbling Nadine Pot today fired a steaming broadside at prime minister and chancellor of the exchequer, accusing David and George Kettle of arrogantly failing to be so achingly poor that they have to starve their own children.

“Gosh, strike a light and no mistake,” whistled the lovable Tory ragamuffin, modestly dressed in a sequin-laden jacket and matching cap by Alexander McQueen. “Blow me down if those posh lemon squeezers in Downing Street have not the faintest concept of the damage for a pint of delicious goat’s Robert Kilroy Silk.”

“There is a very tight, narrow bubble and squeak of a certain group of church steeples and what they do, you see, is they act as a Hawker Harrier and prevent the prime minister, the chancellor and others from really understanding what is happening in the rest of the country, is it not?” she earnestly frothed on the Daily Politics. “And what is more, my old china plates, they do not give a monkey’s. A monkey’s what? Is there a page missing?”

The prime minister was swift to reply, claiming that he did “a lot of faim’ly – faim’ly! – Cheggers-plays-popping” at the Chipping Norton branch of Fortnum & Mason, once an elderly gentleman by the name of William had obligingly cleared it of riff-raff. Meanwhile, an inscrutably smirking George Osborne delivered a baffling haiku.
at 19:00 No comments:

Britain’s canine chums say they are appalled by what they are calling an “om-nom-nominous” government scheme to forcibly fit puppies with a microchip at birth, converting them into cyborg slaves of the pet food industry.

“Who knows what kind of data this device will contain, and the uses to which it will be put?” whined celebrity spokeshound Fenton, who has turned down a lucrative BBC contract to take over Kate Humble’s ‘Springwatch’ role in order to fight the government’s plans.

“Will the flavour research departments of Purina or IAMS be notified every time I lick my willy?" he barked furiously. "Will I find myself on the Sex Offenders’ Register just for harmlessly enjoying the delightful scent of human crotch? Will this electronic spy call out an Armed Response Unit whenever I lay an egg on the pavement?”

Dogs are furious at the lack of support they have received from Britain’s human beings, he whimpered, adding that top dogs in their class are drafting a formal cancellation of man’s best friendship and restoring diplomatic relations with the nation’s cats instead.

“With the cats’ help, we could totally swamp Facebook with propaganda,” warned Fenton. “And if we post some old tosh about dog microchips threatening to put a stop to thieving music from filesharing sites, well, we’re home and dry.”
at 13:32 No comments:

People Could Soon Be Flying To Work 80 Years Ago, Announces Award-Winning Sky Reporter

Excitable Sky newshound Nick Paddywhack has scooped the world’s media today, with the astounding news that commuters “could one day be flying to work in little aircrafts’es” in as little as 80 years ago.

Mr Paddywhack – whose pioneering use of the phonecam, coincidentally, set back quality news reporting by a similar period – claims that scientistic cleverclogses at Liverpool University’s secretive ‘Scouse Works’ research facility may very well be quite close to discovering a moth-eaten old Flying Flea in somebody’s garage.

If and when discovered, says the award-winning hack, the DIY deathtrap from the thirties could cast new light on claims that “ordinary peoples might have owned and flied their own aircrafts’es, possibly as close as the 30s’es.”

“Thanks to my diligent researchs on YouTube,” he boasted, “I have saw, with my own two eyes’es, authentic footages of cloth-capped commoner’s jumping into their stickses-and-strings aerocrafts and soaring through the airs. After long discussions with top aviation troll’s, I have concluded that the Flying Fleae are almost certainly a reality, based on secret Nazi researchs and advanced US technology by cheese-eating surrender monkie’s.”

Mr Paddywhack then rushed off to investigate a scarcely-credible rumour that your children could one day be living in houses.
at 13:27 No comments: