The implosion of the Daily Mail today - after its discovery that hated EU laws could save the proudly British disgrace of binge drinking from its beloved Tories’ unpardonable pettiness – has summoned into existence a deadly singularity which threatens to suck all rational thought out of existence, astronomers confirmed today.

“Our instruments recorded a brief but massive burst of noise from Paul Dacre’s office,” explained NASA’s Dr Randy von Braun. “That in itself isn’t unusual, but this time it was abruptly cut off before it could resolve itself into the usual expletive-laden tirade against the hapless hacks trapped in his orbit. When our colleagues at Greenwich Observatory pointed their telescopes at Kensington, they saw a terrible, lightless void from which nothing can escape – Northcliffe House, the home of Associated Newspapers.”

“The worrying thing, though, is that it seems to be expanding,” he added ominously.

The still-expanding event horizon has already engulfed the whole of Middle England, where millions of minds have already been sucked into oblivion by the awful rift in the very fabric of normality.
at 18:27 No comments:

Parts Of Britain Hotter Than Somewhere Else

It’s official – Britain is today basking in temperatures which are warmer than anywhere else in the entire world which is not as warm as Britain!

All over the country feisty young slappers were disporting their bouncing, succulent breasts and leggy legs, while sweltering picture editors panted for breath and loosened their trousers in the hottest heatwave ever recorded since the last time it was this hot!

“This warm weather is very likely to go on and on until finally it turns a bit chilly!” predicted someone from the Met Office who seemed to know what he was talking about!

Meanwhile the whole of Britain will be in the garden this evening, robotically turning sausages into carbon and not wasting a second’s thought on the impending drought that is about to kill us all!
at 18:14 No comments:

The sex tape of X-Factor judge Tulisa Cuntostavlos which, by the damnedest coincidence, happened to surface on the internet just in time for the launch of her debut solo single is disappointingly shonky, but nevertheless a bloody good reason to keep her on the panel, says TV overlord Satan Cowell - adding that it has inspired him to develop an entirely new format which will further hasten his carefully-planned apocalypse.

The Cowell thing is already recruiting a judging panel of drooling Z-list has-beens whose careers have reached the point at which they will actually be glad of the opportunity to pollute themselves into a communal bucket for the amusement of idiots.

“Noel Edmonds is quite keen,” he smirked. “Half a pint keen so far, in fact, and he hasn't even seen any tapes yet.”

A spokesman for Ofcom, the body which is nominally responsible for maintaining some sort of standards on TV, said: “On the one hand this is the worst kind of cynical exploitation of human folly, the merest channel-hopping glimpse of which will surely degrade and corrupt viewers into a state of permanent imbecility. On the other hand our demon lord has decreed it. So it’ll be on ITV, seven o’clock tomorrow evening. Don’t miss it.”
at 20:03 No comments:

“It might have helped a bit if you hadn’t appointed Jordan - a walking orange whose tits drip silicates - as the 21st-century equivalent of Dr Benjamin Spock,” he warned sadly. “And perhaps if you hadn’t delegated all responsibility for your offspring’s welfare and development to their poor bloody teachers, the DVD player and a Nintendo DS Lite, they might even consider standing on their own two feet one day, instead of plaguing you with incessant, whining demands until the merciful day that you die. Which, needless to say, they will never forgive you for.”

“But hey, don’t listen to me because I’m only some sort of expert, so what do I know?” Sir Michael added ruefully, as the hatch closed over his head forever. “Whereas you, of course, were born knowing it all.”
at 19:58 No comments:

Pencil-Lifting Police Too Thick To Fill Out Ballot Paper

Police officers who are fit are incapable of placing a cross in the right place on their ballot papers, admitted exasperated Police Federation officials today as they contemplated asking their members whether they want the right to strike - and those who might be capable of understanding a simple yes/no question are struggling to lift the heavy wooden tube with a black filling.

“After all the unquestioning love and loyalty we’ve shown them over the years, how bloody dare the Tories expect us to read and write, and be able to jog as well?” demanded an aggrieved spokesman. “If this lefty nonsense isn’t nipped in the bud right now, before long they’ll be asking us to work out the difference between right and wrong.”

‘Hooky’ Wiggins, a 42-year-old lifelong doley plagued by chronic back pain whenever it suits him, has been appointed to head a crack team of expert wasters appointed by the government to look into fresh claims of systemic fraud at profit-from-welfare business A4e.

The investigators, who are to be recruited from the ranks of long-term skivers in handy-excuse blackspots like Liverpool and… well, OK, just Liverpool, are expected to leave no stone turned in their half-arsed quest for something medically indistinguishable from the truth about the dubious practices of A4e’s wayward consultants.

“Benefit fraud is costing this country hundreds of thousands of billions of pounds every day, probably,” fumed No Work or Pensions Secretary Iä Duncan Smith, the black goat of the woods with a thousand young. “These feckless, workshy bastards are perfectly capable of reporting A4e’s dodgy tricks, if they put their backs into it.”

At this point a terrific stage groan shook windows all over the North of England, emanating from an epicentre thought to be somewhere in Bootle. A4e immediately submitted a tender document to the DnWnP, offering to sort out the noise for the usual fee, no questions asked.
at 21:48 No comments: 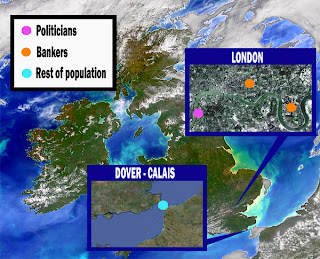 Tree-Hugging Lesbians Made Me Tarmac The Countryside, Insists Cameron

Sandal-wearing lesbian whale-fanciers from Greenpeace told David Cameron the only way to safeguard the environment is to place it all in the gentle hands of the construction industry, insisted the prime minister today, so the nice men in hard hats can seal it for ever under a protective coat of hard core and asphalt and charge you a hefty Save The Planet Tax for the privilege of taking your evil car out of your drive.

“If you cast your minds back to when we won the election outright two years ago, I warned you that we would be the greenest government ever,” observed Mr Cameron. “Well, I had a couple of things to crack on with first, such as my longstanding commitment to play basketball with President Obama, but you must have known I’d get round to saving the planet sooner or later.”

“Here’s the deal,” he continued. “I hand Britain’s remaining green bits over to my environmentalist chums at Amey, and they preserve them under ten inches of tarmac. This will be paid for by the money we’ll save on maintenance by letting the existing motorways fall apart; they’ll soon be glorious nature reserves for Britain’s threatened weeds. In future, as soon as my yellow-jacketed friends see a traffic jam forming, they will quickly paint in an new motorway, set up a tent to sell tickets and bob’s your uncle, that’s another endangered butterfly saved from extinction.”

“My panda-friendly advisors tell me this’ll work beautifully for airports, too,” he smiled. “But remember: every time you raise an objection, a beautiful smiley dolphin dies.”
at 12:06 No comments:

A washed-up nobody from the depths of BBC purgatory, Radio 5 Live, broke down in tears today as he told reporters that years of receiving vindictive internet abuse had brought him to the point of making several grand from a documentary about his traumatic experiences - which, by pure coincidence, airs this evening on the TV purgatory, BBC Three.

Poor little Richard Bacon - whom older readers may remember as the Blue Peter presenter who got himself sacked for being caught with his head buried in a bag of nose candy – wept openly as he revealed that, tragically, somebody somewhere doesn’t like him.

“If someone as utterly bloody gorgeous as me can be disliked,” wailed Bacon, “I wondered what kind of internet hell lies in store every day for ordinary little dull people who are too ugly to work in the media? And I realised there could be a profitable hour of sympathetic nodding to camera in this.”

Bacon went on to warn that, in the insane world of the internet, repulsive dullards like you are given an opportunity to actually say what you think to lovely people like him.
at 12:02 No comments:

Angst-ridden football supporters are united today in blaming Fabrice Muamba’s life-threatening on-pitch heart failure solely on their own selfish need to be entertained by fast-paced action.

“This pointless tragedy has finally opened my eyes,” each ashamed supporter admitted. “Anyone who still thinks it’s in any way acceptable to drool over this brutal contest deserves to be shunned by decent folk.”

“No game is worth a man’s life,” added the remorse-filled fans. “I’m cancelling my Sky subscription immediately, because I sense this must be something to do with Rupert Murdoch. He’s turned me into a baying, blood-drenched fiend, using hypnosis or something. Yes, that must be it. Everything’s his fault, the murdering bastard.”
at 20:24 No comments:

Tiresome spoilsport God is to be barred from Britain for the duration of the London Olympics under emergency legislation which, sources say, will be pushed through in George Osborne’s budget on Wednesday.

The chancellor is reported to be furious at God’s mulish refusal to permit dedicated sport fans to buy a sofa at 5:30 on a Sunday morning.

“If God won’t let the servant class work all the hours He sends, He can bugger off to North Korea for a couple of weeks and jolly well like it,” snapped a Treasury official. “His pig-headed attitude proves - if proof were needed - that sport and religion don’t mix.”

God may be allowed back into Britain once the sporting event has ended, he added, but only if He gives His solemn undertaking to the Tesco board of directors never again to interfere in their good works.
at 20:19 No comments: