Not only has your mattress been refusing to allow you access to your own savings, but it emerged today that for many years it has been secretly applying a considerably higher rate of interest than the attractive 0% it claimed it was charging whenever you made a withdrawal to buy a new pair of shoes.

And then it lent all your money to that old biscuit tin in the kitchen cupboard, and the odd shoe you keep at the back of your wardrobe.

And then they threw all your cash down the toilet, because they thought that would be a great idea.

“I thought I had £3,000 squirreled away under the bed to cover the cost of my own funeral,” sobbed saver Mavis Hodge, 83, a lifelong customer betrayed by the greed and incompetence of her mattress. “Now it turns out I owe the bloody thing £361.24 in cumulative interest, and it’s got the cheek to demand an unauthorised overdraft fee.”

The full horror was revealed by the blow-up spare bed you keep in the cupboard under the stairs, which nevertheless insisted that not all mattresses were unscrupulous thieves and brigands whose sole aim in life was to stuff themselves with all of the money in the world.

“Some of us have principles, you know,” he insisted loftily. “If you were naïve enough to try cutting me open to shove a wad of fivers inside, for example, I’d have warned you that you could be in for a big let-down.”

After your mattress was fined £290m – which will be tacked onto your overdraft – the prime minister emerged sleepily from his teapot to yawn for the resignation of your headboard.
at 19:31 No comments: 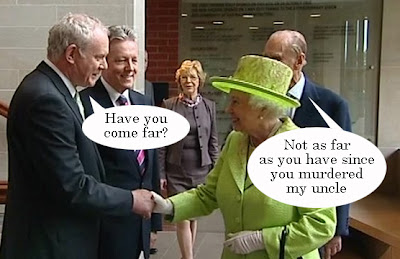 The roaring beast – promoted by his handlers as ‘the last of his kind’ – was deceptively docile at first, but the moment the pretty young minister flounced onto the set his mood became increasingly wild and agitated.

The menacing grey gorilla toyed with her at first, prodding her playfully and rolling his eyes every time she tried desperately to soothe his massive, furrowed brow by repeating a quavering song about “households and businesses”. Suddenly breaking free from his restraint, however, he horrified his gawping audience by snapping his unequal challenger’s head off and ripping her to pieces, before rampaging through the emptied Television Centre to clamber onto the roof - from where he continues to shower the BBC car park with gory chunks of the hapless treasury junior.

“I smelt the fear the moment I switched on the telly,” cringed a traumatised eyewitness, cowering behind a back bench. “Why on earth wasn’t the Great Shite Chunterer on hand to shoot down this terrifying monster?”

A sheepish David Cameron today insisted that Mr Osborne had, in fact, fully intended to face down the legendary monster - but explained that the chancellor had unfortunately taken several wrong turns on the way to the studio before finally running out of fuel in a blind alley leading nowhere.
at 17:29 No comments:

The government’s brief suspension of the coming 3% rise in fuel duty proves beyond all doubt that the notorious capitalist running dog, George Osborne, has finally accepted the undeniable truth of revolutionary socialism, jubilant shadow chancellor Ed Balls told a cowed and beaten House of Commons today.

“Make no mistake, comrades, this is truly an historic moment in the annals of the revolution,” Mr Balls declaimed exultantly. “When, at long last, even the evil bloated plutocrat Osborne cravenly acknowledges the supreme validity of socialist economics by inserting a six-month pause into the hated fuel escalator inflicted on the downtrodden masses by the vainglorious running dog John Major, the triumph of the working class is complete.”

When asked by reporters afterwards why, during his many years as an economic advisor to Comrade Brown, he had somehow neglected to point out the inherent counter-revolutionary nature of planned rises in fuel duty, Brother Balls solemnly cautioned the press against any further mention of “that non-person”.

Comrade Balls is also understood to be so utterly committed to finalising the long-overdue downfall of the discredited feudal hierarchy that his strange lack of opposition to the tottering elite’s impending downtreading of the young masses, fire-sale of the machinery of state and closure of the people’s hospitals can surely be forgiven, explained his burly commissars.
at 19:50 No comments:

The pointy bit of the big place where all the politicians live with bells in it, which everyone mistakenly calls Big Ben, is to receive another name which they will immediately forget.

Despite the tall thing being given the same name as the Queen, the collective British consciousness said it is supremely confident that it will remain as impervious to new information as it has been over the magnificence of its empire, the benefits of its special relationship with the United States and the obvious superiority of its footballers.
at 19:45 No comments:

Red-faced programmers have apologised for the glitch which caused David Cameron to inflict his NotBest Wank misery on the hard-up public this weekend, blaming the problem on a routine downgrade to his soft head.

Millions found themselves contemplating abject penury when, without any warning, the prime minister suddenly began spewing random gibberish into a pair of senior Daily Mail reporters.

“It’s all very well Mr Cameron’s minions working overtime, but most of us don’t happen to have huge wads of cash squirreled away somewhere like Jersey for a rainy day,” complained a typical impoverished customer, “But it seems a bit unfair to expect people to live on their parents’ credit cards until the welfare state comes back online at some unspecified point in the distant future.”

“Especially when so many of us are slaving away on less than the minimum wage,” he snapped. “We’re totally reliant on Mr Cameron sparing us a token bit of interest. I’m switching, but it probably won’t make any difference. Milibank or Barclegg – these wanks are all as bad as each other, aren’t they?”

“It looks like Cameron’s no benefit to anyone,” he concluded in disgust.
at 19:03 No comments:

Pubs all over England erupted in frenzied cheers today as David Cameron, the legendary right-winger in the number 10 shirt, led his dream team of millionaires to victory with a beautifully-timed kick to the unemployed.

“The lads have been feeling sick as a parrot lately, what with all these intrusive stories in the papers lately about their tax lives,” admitted an ecstatic Mr Cameron, after being carried around the stadium by delighted fellow players including Sir Chris Hoy, Gary Barlow and Jimmy Carr. “But when I suddenly saw the ball coming my way, I knew I had no option but to boot it clean through the back of the welfare safety net. I reckon my old dad would be proud of me.”

“It’s a funny old game. One minute you’re down, the next you’re up,” grinned spud-faced bad boy Jimmy Carr – back on side after, only days earlier, earning himself a stern talking-to from his captain for bringing their game into disrepute and feigning injury. “But it doesn’t matter, because this shows our critics that we just can’t lose.”

All over the country, meanwhile, manual workers on council estates and middle-class housewives alike are deliriously chanting the same happy song to their unemployed neighbours: “You’re going down!”
at 20:15 No comments: