Who Is The Doctor And Where Is The News?

As the BBC spends more of the licence fee than this year's entire drama budget on revealing that an actor will play a character, the Nev Filter enthusiastically joins the rest of the media in abandoning boring old news in favour of pointless speculation about WHO (geddit?!) will play the last Dr Who until the show's chief nerd writes himself implausibly out of a corner.

Mahmoud Ahmedinejad
Outgoing president of Iran. Could bring to the role a moral authority not seen since William Hartnell told Ian and Barbara not to interfere with the Holocaust because it probably didn't happen, or if it did then the Jews were probably asking for it anyway. 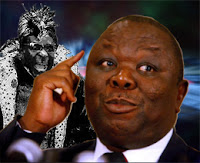 Morgan Tsvangirai
Outgoing prime minister of Zimbabwe. Insiders say he is desperately keen to take on a new role, and keenly desperate to take the first flight out of Harare International. Could be entertainingly chased all over the cosmos by minions of the Black Guardian (Robert Mugabe).

Prince Philip
Ongoing Mr Queen of Great Britain, Northern Ireland and of Her other Realms and Territories. Would bring 92 years of supercilious cheek to the role, calling Daleks "wogs in tins" and quipping that the Cybermen can't be made in China because only their mouths are slitty.

Kirobo
18-inch talking robot, purpose-designed for space adventure and providing a feeble pretence of belonging and companionship to lonely middle-aged men who don't get out enough.
at 10:12